I’m just pulling out all the stops today with several posts-but i have to try to make up for lost time as much as possible!

I really love this one- i decided I really needed to attempt a white space project as I reallly tend to fill up all my available space with paint and whatever I can find. As I often say ” Why do it, when you can overdo it?” LOL!

Anyhow- so here I am using Dyan Reavely’s Mixed Media journal. I started with a layer of gesso. When it was dry I sprayed the pages with water and dropped various colors of acrylic ink on it in layers- which I used Dyan’s technique of rolling over it with paper towels between every color layer and semi drying each one. 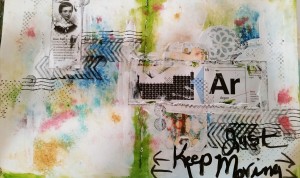 I then added some more gesso here and there- upon which I attached a premade tag – a doily sticker, and some partial pages from a book from The Onion-, which I covered with some more gesso and black stamping-some homemade stamps and some wooden block stamps. I finished with Golden green gold liquid acylic and some lettering I added with black india ink and a paintbrush.

I am really proud of this one and happy I was finally able to show a little restraint!

I chose Just Keep Moving as my footer because I had recently made a career move in the midst of many coworkers who were unhappy and yet seemed really afraid to step out and find work elsewhere because they had been there so long-they had just stagnated and felt stuck- also it pertains to interpersonal relationships that pretty much tend to work the same way. It’s hard to move on after you have made such an investment and worked so hard on something that you know has no real future.

So- here is to all of you who know you need to move on and want to, but are afraid. Just keep moving- you will make mistakes and be really afraid sometimes-but that is better than letting yourself be stuck somewhere that will never make you happy.

Cheers and thanks for playing!

" I'm not even supposed to be here today!"